This post is really about random gist and how God uses the random things in our lives to instruct us.

At first I was so excited that I get to rest, then after two days I became bored and even though I was offered a temporary job, I turned it down because there were so many things I needed to sort out.

Firstly, I got a place of my own and if I ever had doubts that God is mindful of me, the way I got the house certainly erased that thought. Don’t even let me talk about Agents and how dubious some of them are but I got the victory ; Hallelujah to this.

Some landlord didn’t even consider me because I kept on telling them I had a daughter and no husband. At first I was explaining then later I thought they don’t even deserve my explanation being a single mom is not a sin abeg.

Then some of them thought I might not be able to pay my next rent so they stylishly told me no.

God never forget his own because I got a cool house, in a good place with little stress plus plenty drama.

Completing my Housemanship and getting a new place however brought back a lot of memories and projected me into reality. I faced the rude reality that I actually have to start living life without Dee which itself is confusing because that is what I have been doing for the past one year.

When we got our first house, I didn’t even have to lift a finger, Baba did everything. In fact all I did was move my things into the house some few weeks before the wedding (don’t judge me oh) (I followed him to buy the curtains and rugs too sha). 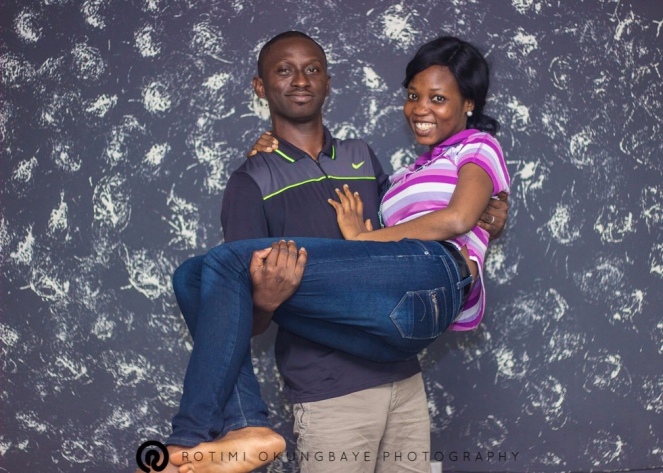 Now, I was faced with moving into the new place on my own, the thought alone was overwhelming and despite the fact that my “people” came through for me, it was still a lot of stress.

I am boring you with all these stories to drive home a point which is that God is mindful of you. I know it seems I say this a lot but it really sums up the story of my life.

While I was feeling overwhelmed and struggling with my emotions, I decided to reduce social media interaction because since I was less busy it will be easier to just get sucked in plus I belong to a group of women that have decided to die to self completely and we were fasting distractions (more gist on this later).

However during one of my legal social media time, I stumbled on this post by Daniel broker ( he was a widower and he is currently remarried to another woman who also lost her husband) about another man who lost his wife.

I opened his page and I saw that the way he lost his wife was really similar to the way my husband died. He also writes a blog and I spent a lot of time going through the blog and then I knew why God made me stumble on his post. One of the things that struck me in one of the post is that;

“the enemy would love for you to believe you are alone in your journey, that you are the only one dealing with the pain you are currently undergoing”.

The truth is that there are hundreds, maybe thousands of people who are walking through very similar trials as you.When your eyes are opened up to this, it makes your problems seem such smaller in the light of the larger picture of pain in this world.

I guess, no matter how hard you think what you are going through is, someone else has walked the same path. In fact his wife was pregnant with their unborn child when she died but he is using his pain for God’s glory.

I ask so many questions;

Why did he die?

Why did he have to die the way he died?

Why did God allow me marry him when He knew he was going to die?

I still don’t have all the answers but one thing is sure,

“GOD HAS GOT THE WHOLE WORLD IN HIS HANDS”

Nothing is wasted, those memories, lessons learnt together, our beautiful child and so much more provides enough evidence that our time together was not a waste.

Many times I have had doubts about writing here but God has always sent reassurance my way.

At first, I thought who will read it but that is history today.

Sometimes its on days I feel inadequate that someone will send a message to tell me how a particular post blessed them and how it was an answer to the questions they have. I can’t by no means take the glory for this because it is all God.

He is the treasure in this earthen vessel.

“But we have this treasure in earthen vessels, that the excellency of the power may be of God, and not of us.”

Let him use your pain for his glory, like I shared in our Wild Women group;

“Pain has an assignment”

I know it hurts and you would rather it didn’t happen, but if you hand over that pain to God, he will make something beautiful out of it and out of your life.

Like I told one of my friends, I really don’t know what to do with myself right now, I thought I had everything figured out but I am learning that it is really okay not to be in control every time.

One thing is sure though, He has it all in control.

So no matter what you are going through, Jesus went through worse and this scripture has never been truer.

“And we know that all things work together for good to them that love God, to them who are the called according to his purpose.”

Everything is going to be alright.

7 thoughts on “PAIN HAS AN ASSIGNMENT”

HELLO darling.....thanks for stopping by.I am a 31 year old christian chick that loves GOD and is absolutely crazy about him (Oh I am a doctor too). I have the privilege to be a mama to my beautiful princessa. I am passionate about helping people draw closer to GOD,hence He led me to start this blog.I love to read(I read a lot of blogs too) and write.I pray you find the information here useful to live sanely in a world that is full of chaos.It is good to have you here.